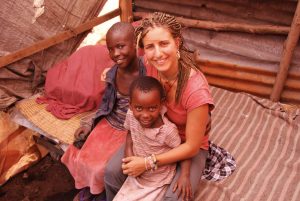 In November 2012, Rosa traveled to Rwanda for the second time and volunteered for a micro-loan organization, Rwanda Sustainable Families (RSF). While Rosa and her translator, Felix, were conducting home visits she met Ayinkamiye Solome and her family. Solome received a loan from RSF in which she purchased rabbits to breed and sell. She hoped the income would help her family to raise enough money to build a proper home. At the time of Rosa's visit, Solome and her family had been living for more than a year in a patched together, corrugated metal structure with a tarp roof. Before that, the hillside village in which they lived had been washed away by a landslide. The government had moved the people to a safer location in Kanembwe Village and provided each family with land. However, most people including Solome’s family could not afford to build a proper home. 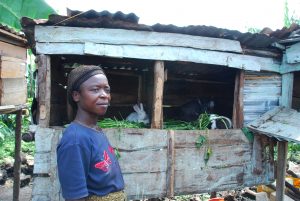 Felix translated their ongoing struggle and it resinated deeply within Rosa. Solome and her husband, Kiyoge Issac, are genocide survivors. Issac lost an eye from shrapnel and suffers from PTSD which escalates in the month of April, the anniversary of the genocide.  Both Solome and Issac are HIV+. While they receive antiretrovirals from their government, they often do not have enough food in the morning to take with their medications. This causes them to have stomach issues which then makes working difficult. 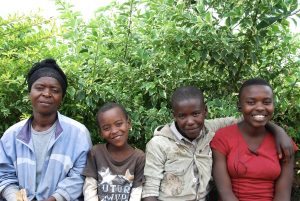 Solome and Issac are blessed with four healthy, beautiful daughters; Nishimwe Emerance, Uwimbabazi Gentille, Ingabire Jeanette, and Nikuze Joyce. Unfortunately, the structure they built to live in was too small for all six people, resulting in Emerance and Gentille were sent to live with their aunts.

Rosa recalls walking with Felix after meeting Solome and her family. She remembers discussing their hardships and the moment Felix turned to her and said, “You should come back next year and build them a house." Rosa initially thought this was impossible as she knew nothing about fundraising or building houses in Rwanda. However, the seed Felix had planted germinated and during the remainder of her time in Rwanda the idea blossomed. By the time Rosa was flying home, she knew . . . in a year . . . she would return to build Solome and her family a home.

In April 2014, a team of masons along with Rosa, Felix, Solome and her family worked together to build them a new home. The house was constructed over the course of one month, at a cost of $2,500. Thanks to generous donations from Rosa's friends and family Solome, Issac, and their four daughters moved into their new home and started on a new life. This is just the beginning.

Every year Rosa travels back to her second home in Rwanda to facilitate the construction of new houses. The reunion between Rosa and Solome is always joyous and heartfelt, as a special bond has developed between them over the years. Solome has turned her house into a home, even with limited resources. Curtains made of old fabric are hung the windows, wash is on the line in the backyard, and Solome went to great lengths to create a beautiful garden with vegetables, flowers and several fruit trees.

Today, Solome’s daughters are thriving. Emerance is married and teaching in Kanembwe’s primary school. Gentille is also married and recently gave birth to her first child. Jeanette and Joyce still live at home while attending secondary school. Solome continues to work as a seamstress to help support her family. This experience changed the lives of Solome and her family but also Rosa’s. It was the beginning of something greater. Little did they know more houses would be built and a community of Inshuti would be built around them.